Beyond the Psittacines: Could Babblers Be Right For You? 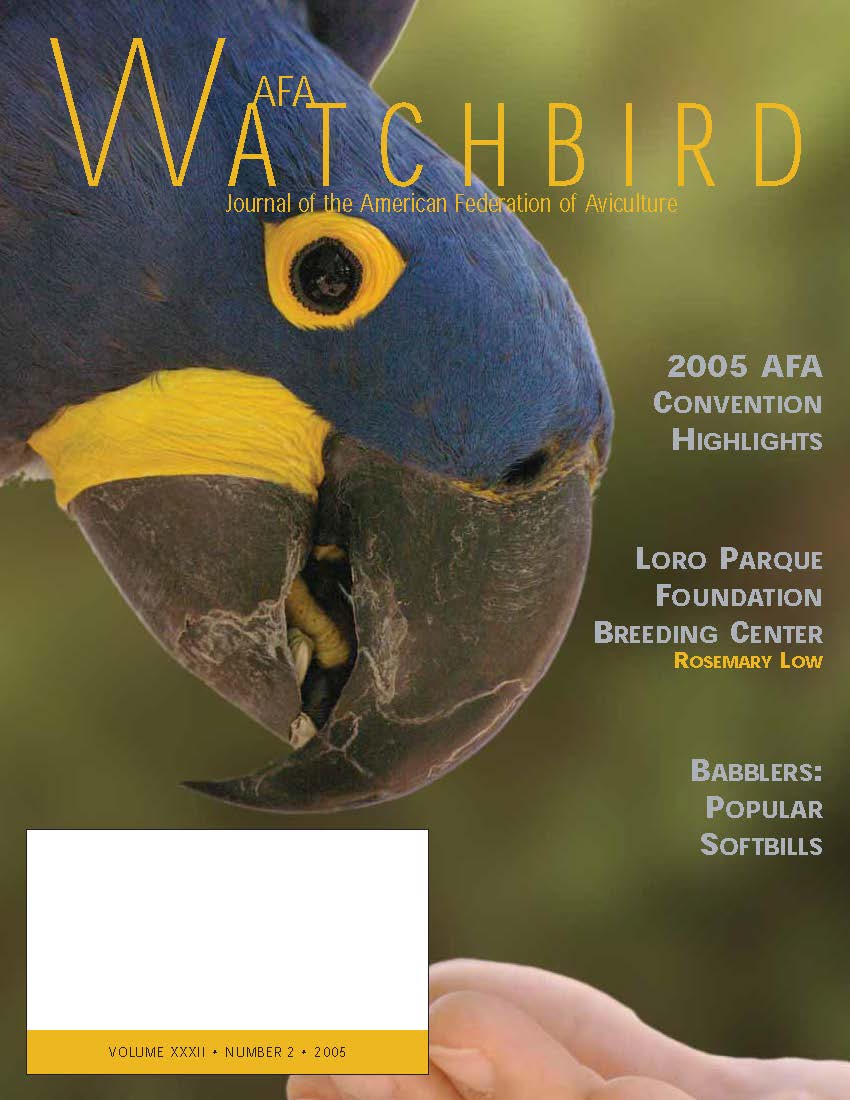 I have always found softbills and tnches to be very intriguing birds, but was afraid to have any because of all the work they areD,omething you hear from a lot of hookbill people. I think it has happened to all of us. You are with a group of friends and everyone talks about how difl.cult it is to keep softbills. How you need to spend countless hours chopping fruit and such. You also hear about the amazing expense of the food. I always just went along with it, but Chally took the plunge into some of the non-psittacines. The intrigue of the birds had won me over. As much as I love my parrot-type birds, I don't know why I spent so long without some of the others. I now have a mixed Dght outside the kitchen window that houses songbirds. From dawn till dusk the house is Died with song. It is true the expense of fruit has gone up a bit from when I had just hookbills, but my seed bill has dropped to almost nothing.

Have you ever thought of keeping non parrot-type birds? If so, maybe Babblers are the birds for you. They have all of the personality of hookbills, but are in need of far less attention and often have very complex songs. It can be quite enjoyable to watch them in the aviary eying around, hopping from place to place. When you leave the realm of psittacines, you will discover a vast expanse of incredible other bird species. Most of us automatically think about Mynas and Toucans, but these are only a small part of what is out there. Different birds suit different people and I myself have fallen in love with the family known as Babblers. Babblers are mainly smaller to mid-sized old world tropical birds, mostly forest dwelling. They get their name from the constant small noises they make; if put in a quiet room you would be quite sure they never stopped babblingdfhe family includes many species, including laughing thrushes (Garru/ax sp.), Yuhinas, Minlas, Pekin Robins (Ueothrix /utea), silver-eared Mesias (Ueothrix argentarus), and Sibas (Heterophasia sp.) among many others. Babblers are mostly insectivores, many of them spending a lot of time turning over leaves and such in search of insects (they catch a lot of their own food in the warmer months . Bein that most babblers are from the forest

There are around 50 known species of Laughing Thrushes (Garrulax), with new species still being discovered. The Chestnut-eared Laughing thrush (G. konkakinhensis) was only discovered in 1999 in central Vietnam. Laughing Thrushes vary in size and appearance, most being between nine and twelve inches in length and varying shades of brown, cream, rust, and white with many shades and some other colours present. Very ornate patterns are present on some species as well.

Laughing Thrushes are known for being aggressive and should be housed one pair to a Dght as they may cause harm to each other and smaller birds (and sometimes even larger birds), but there are always exceptions. Best breeding results are in single pair Dghts. The diet of most Laughing Thrushes is that of most insectivorous omnivores; insects mixed with pellets, diced fruit and a quality universal food or egg food with other treats radded in for variety. Some softbill people also use a sponge cake or pound cake in their diets. Though often kept for appearance, laughing thrushes often have very clear melodious whistle or bell-like songs. Some laughing thrushes like the Hwamei (G. canorus) are very drab, in its case a soft ginger-brown with an eye streak of white. Nonetheless the Hwamei is much sought after for its incredible melodious song. Many Laughing Thrushes, as the name implies, have calls reminiscent of a distant human laugh. Laughing Thrushes are a very intriguing group of birds and well worth the work of diet preparation.