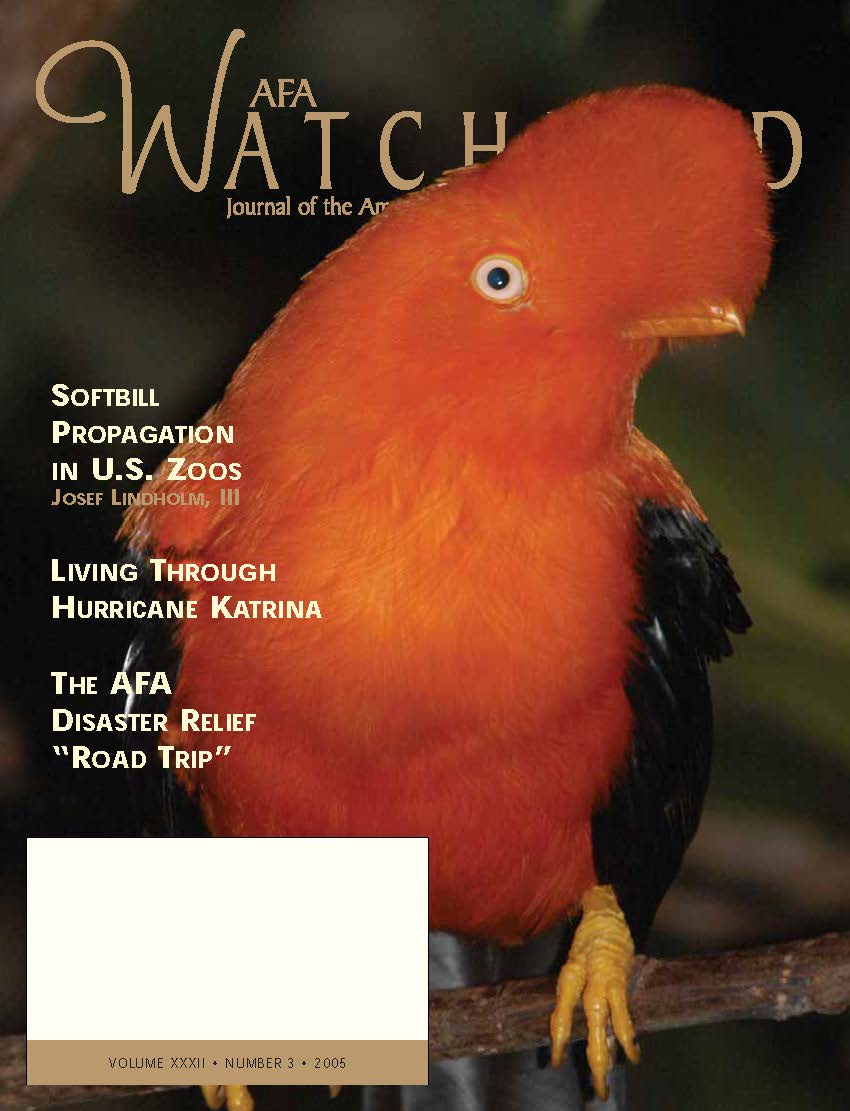 Soon after Hurricane Katrina hit the Gulf Coast, it became apparent that there would be many bird owners in the area that would need assistance. People needed food; they needed supplies for birds, dogs, cats, and their families as well. The magnitude of the area affected by Katrina was too large for one or two people to adequately assess the needs of bird owners and breeders, let alone assist them with those needs. Over 90,000 square miles of land were affected by Hurricane Katrina, making it one of the largest natural disasters
in United States history.

The day after the hurricane made landfall, South Central Regional Director Matt Schmit began to identify those people who were in need of assistance and began to determine what type of assistance was needed. AFA delegates Terry and Loretta Perez in Louisiana came forward with the offer to help distribute food and supplies in their area. Matt coordinated a shipment of several hundred
pounds of seed, graciously donated by Janis Clark of Orchid Tree Exotics, to be sent directly to Terry and Loretta for distribution. There was hope that feed and supplies could reach the outlying areas of New Orleans not affected by the fl oods and the other parts of Louisiana that were affected by the storm. Unfortunately, this initial shipment of seed was returned because the truck driver didn’t want to go into the affected area, even though the trucking routes were confi rmed to be open before the seed was shipped. This caused some major frustration, not only to those who were trying to help, but also for those who were trapped inside a strange new world with no electricity, no water, and no way to get the needed supplies to survive or to feed their animals.

Fearing that no food would be able to reach the affected areas, Matt purchased and delivered 500 lbs. of seed to Terry and Loretta to help those in dire need, while everyone waited for other shipments of food and supplies to arrive. Eventually, several small shipments of feed were able to be sent directly to Terry and Loretta for distribution. Additionally, Matt coordinated delivery of Hagen food donated by Marcia Hamlin of Aviary Supply, and food donated by Pretty Bird, to various individuals in the affected areas.

Coordinating disaster relief efforts in Mississippi and Alabama proved to be even more diffi cult due to the widespread power outages, the inability to determine who needed help, and the inability to determine the best ways to get the help into the area. It was determined that an “AFA Disaster Relief Road Trip,” led by CITES Chair Rick Jordan, would be the best solution for this particular problem, and plans for this endeavor began immediately. Rick was an ideal person for this task, due to his familiarity with the Gulf Coast and with his past experience dealing with hurricanes. Ten days after the hurricane made landfall, the majority of the roads into the affected areas were either still not open or not safe to drive on, and the State Police of Louisiana and Mississippi were instructing people to stay out of the areas until the roads could be secured. This obviously delayed the initial onset of the AFA Disaster Relief Road Trip.