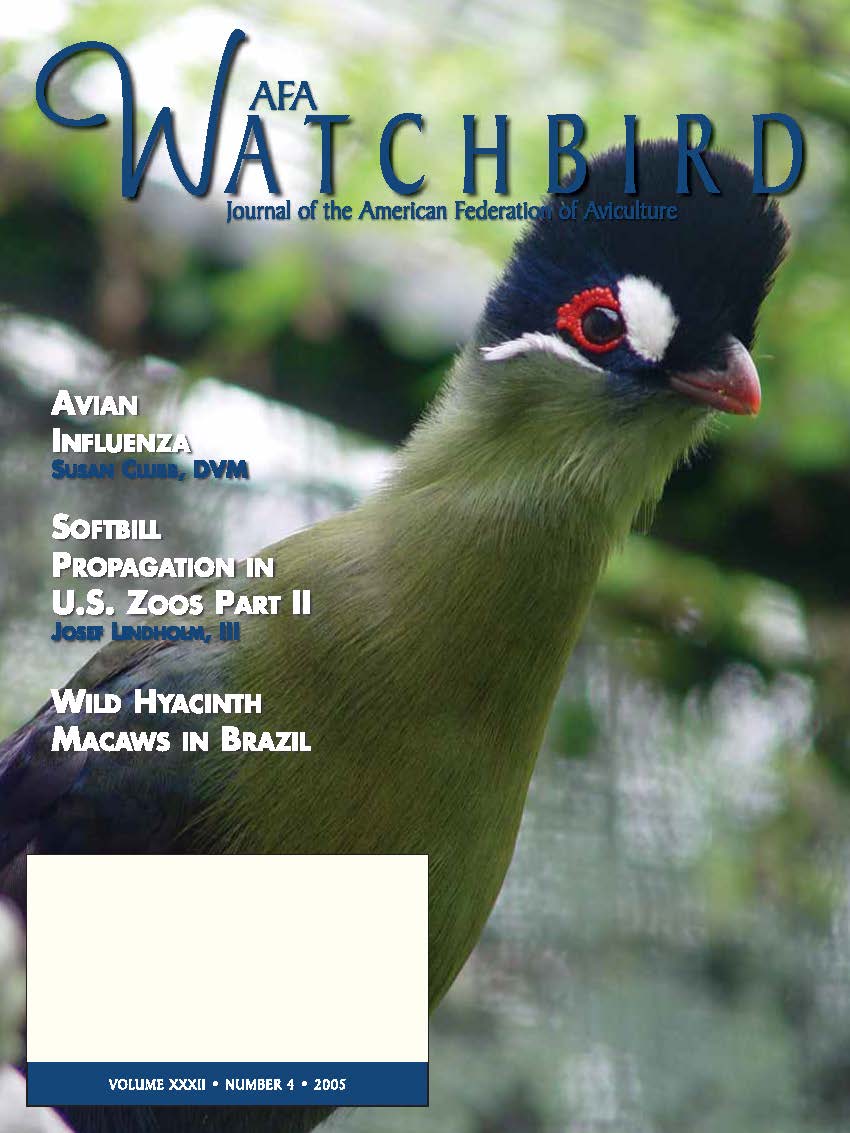 Editor's Note: The following information was prepared specifically for the American Federation of Aviculture at the request of the AFA Board of Directors. An official position statement regarding Avian Influenza is currently being prepared for AFA, and will include many points similar to those expressed below. As soon as this position statement becomes available it will be posted on the AFA website (www.afabirds. org) and will be published in a future issue of the AFA Watch bird.

1. The Asian H5N 1-Highly pathogenic avian flu virus (HPAI) has yet not been found in the United States. Aviculturists should remain on alert and immediately report any suspicious avian morbidity or mortality to the United States Department of Agriculture (USDA) and alert your veterinarian. (www.USDA.gov)

2. If avian influenza appears in the United States, isolating and securing companion and aviary birds from wild birds, especially waterfowl, and poultry will help to protect pet birds from exposure to the avian influenza virus. Aviculturists as well as bird owners, veterinarians and zoological parks should practice enhanced biosecurity at these times, especially in regard to birds which are being shipped or moved from one facility to another.

3. If HPAI is found locally {your state or county) all activities requiring movement of birds should be halted temporarily to avoid exposure to and spread of the disease. At these times aviculturists should practice strict exclusion of birds, people and potentially contaminated objects from entering or leaving their facility. The risk for potential depopulation if outbreaks occur in nearby poultry farms is very real, potentially more real that disease outbreaks in exotic birds. Carefully document your biosecurity measures as a point of defense against un-necessary culling due to exposure.

4. Bird's owners should not be afraid of contracting pathogenic avian influenza from companion and aviary birds in the United States. People, who are potentially interested in purchasing companion and aviary birds bred in the United States, should not be afraid of contracting Avian Influenza from these birds. There have been no recorded cases of transmission of avian influenza from companion and aviary birds to humans. Media reports about Bird Flu have created a state of fear that can be detrimental to birds and the relationship of people to birds. A rational response is necessary to avoid further deterioration of public perception. Although media reports have highlighted the serious nature of bird flu, there are many unanswered important scientific questions about this disease.

5. The USDAAnimal and Plant Health Inspection Service (APHIS) working in conjunction with states has outlined a program for rapid response in the event that HPAI is detected within the United States. APHIS is working closely with poultry producers regarding disease surveillance and disease containment. The USDA has placed temporary bans on the imports of birds from any country in which highly HPAI has been reported. The poultry Industry and the USDA are very vigilant to protect US poultry populations and keep our poultry free of HPAI. APHIS is monitoring wild populations of migratory birds in Alaska, and initiating surveillance nationwide, for the presence of Avian Influenza. For the benefit of our birds, aviculturists should cooperate with USDA in containment efforts. (www.USDA.gov)

6. Avian Flu exists in many strains and mild forms of Avian Influenza are endemic to wild waterfowl such as mallards, but nearly all other varieties of birds have a low incidence of HPAI infection. The presence of Avian Influenza in wild waterfowl does not mean that the birds are diseased or that they can spread a virulent form of the virus to poultry or people. Avian migrations are typically North to South, not from Asia or Europe to the Americas although weather conditions and food sources could alter some routes. Insignificant migrations mostly of shorebirds occur from Russia across the Bering Strait into Alaska. These birds are highly unlikely to come into contact with poultry housed outdoors. If infected birds do enter Alaska the virus could pass to American migratory species that travel north and south in the Americas. Were the avian influenza virus to enter the Western Hemisphere from migratory birds, wild birds in Alaska would be the first to become infected. US government teams are actively engaged in surveillance of waterfowl in Alaska.

7. Pathogenic Avian Influenza is a disease of domestic poultry - not all birds. Effective control must focus on the poultry industry in affected countries. Stringent global monitoring programs; immediate culling and correct disposal of infected poultry flocks are essential to limit the continued spread of the disease. Every effort must be made to limit the spread of the virus from infected poultry to wild...