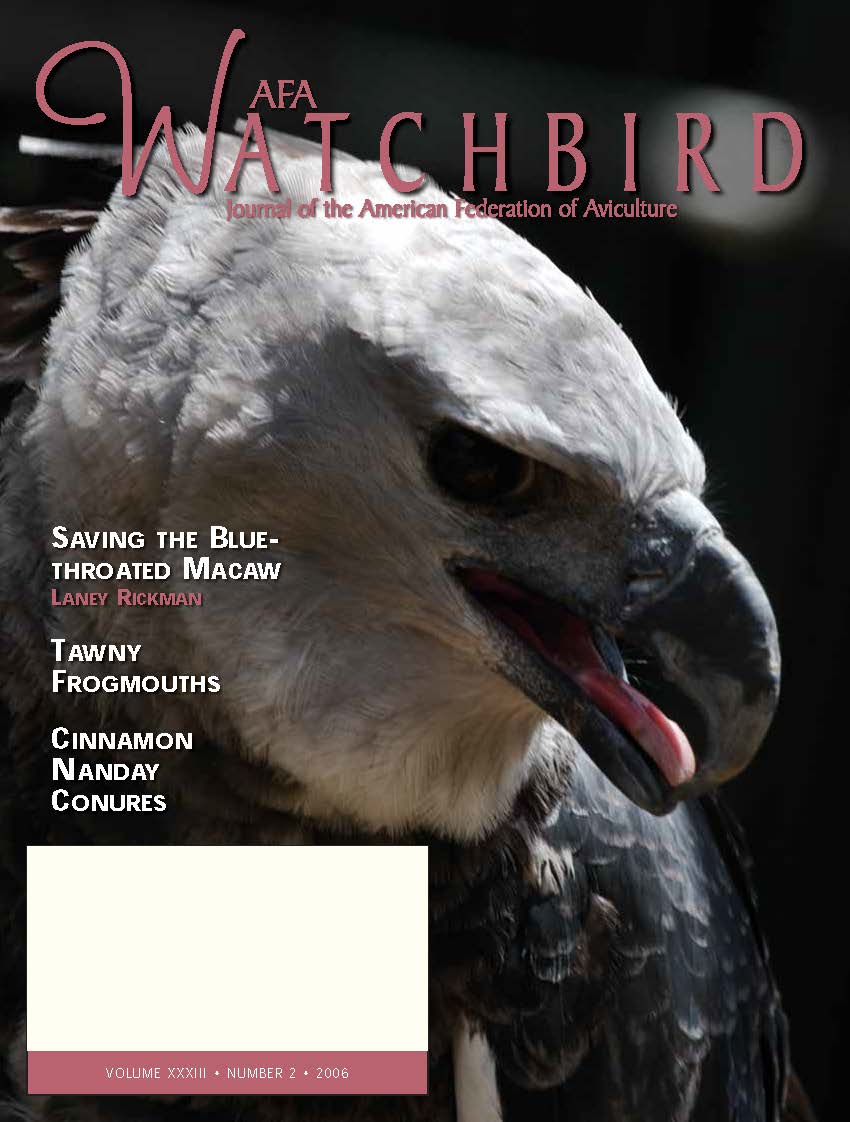 AFA Avian Grants
Program Update
Four projects have been selected for the
2006-2007 AFA Avian Grants program:
• A joint avian conservation research grant in conjunction with Loro Parque Fundación
• Avian intelligence studies by
Irene Pepperberg and the Alex
Foundation
• Population Levels Assessment
and Ecology of the Blue-headed
Macaw under the oversight of Don
Brightsmith of the Schubot Exotic
Bird Health Center at Texas A&M
University
• Assistance with equipping the new
aviary for the Puerto Rican Parrot
(PRP) Recovery Program
In this issue of the Conservation Corner,
Jafet Velez of the PRP Recovery Project
has helped write a summary of this project,
its history, accomplishments, and future,
so that readers may understand why this
is such a valuable effort for aviculturists to
support.
The Puerto Rican Parrot
Recovery Project
Jafet Velez-Valentin - US Fish and Wildlife
Service
Janice D. Boyd, PhD AFA Conservation
and Research Committee Chair
The Puerto Rican parrot (Amazona vittata)
is the last survivor of the four native
parrot species of the United States, the
others -- now extinct -- being the Carolina
parakeet, the thick billed parrot (hanging
on in Mexico), and a parakeet endemic

to Puerto Rico with no common name,
Aratinga maugei. This last survivor has
the dubious honor of being one of the 10
most endangered birds in the world, with
fewer than 30 existing in the wild. But in
the aviaries of the Puerto Rican Parrot
Recovery Program live over 200 of these
parrots, and because of this, the Puerto
Rican parrot has a chance of making a
comeback. The US Fish and Wildlife
Service, the Puerto Rican Department of
Natural and Environment Resources, and
the US Department of Agriculture Forest
Service are cooperating on the Recovery
Program for the species. The agencies
have successful captive breeding programs
and so far about 40 individuals have been
reintroduced into the Caribbean National
Forest in eastern Puerto Rico.
History
Puerto Rico was formerly entirely forested,
and the Puerto Rican parrot once was
abundant throughout all forest types on
the main island, on the nearby offshore
islands of Culebra, Vieques, and Mona,
and some claim also on St Thomas in
the US Virgin Islands. “Iguaca,” as it was
called by the now extinct Taino Indians, is
a bright green bird with a red forehead,
a white ring around the eye, a white
beak, and blue underwing feathers. The
juveniles are very similar in appearance
to the adults, and as with most Amazons,
the males and females appear alike to the
limited human eye.
Human impacts upon the islands were
largely to blame for the decline of the
parrot population during historic times.
Deforestation and shortage of nesting
sites, hunting because it was considered
an agricultural pest, and capture for the
pet trade began to noticeably reduce
its numbers by the latter half of the 19th
century. Up to 99% of the original forests
were cut down for sugar cane monoculture
and other agricultural uses, later
replaced by industrial development and
urbanization. The Culebra subspecies (A.
v. gracilipes) was extinct by the late 1800’s
- early 1900’s. Hurricanes in 1899, 1928
and 1932 drastically reduced and in some
cases eliminated the remaining enclaves
on the islands and on the mainland.