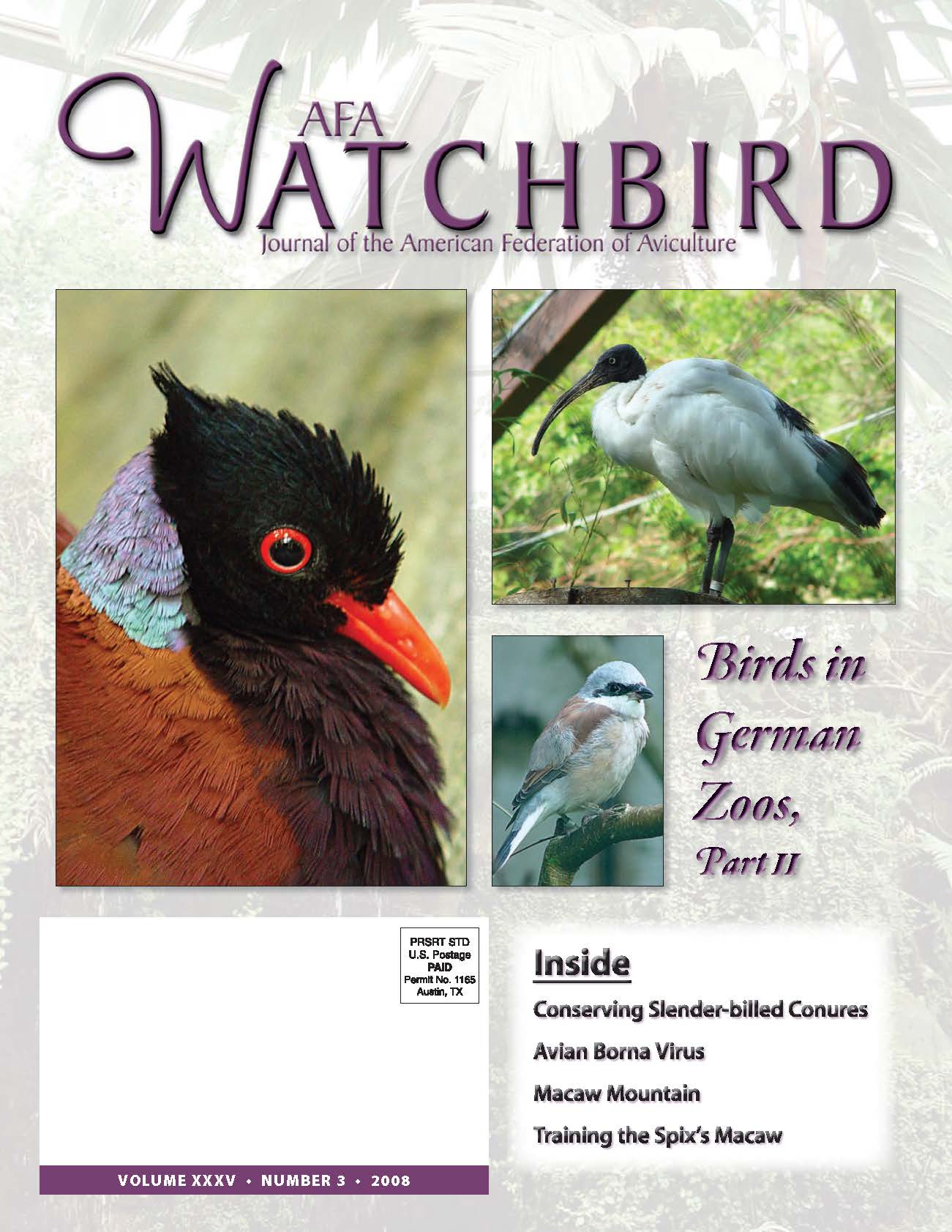 The majority of the world's S pix's macaws are now held in a captive breeding program at Al Wabra Wildlife Preservation in Qatar, a facility owned and operated by Sheikh Saoud Bin Mohammed Bin Ali Al-Thani. Through a series of new friendships (including meeting Ryan Watson, Al Wabra's Blue Macaw Coordinator at the 2007 AFA conference) I traveled to the Preservation to participate in a training project of Spix's macaws, along with Nicole Lang from Cologne, Germany and professional bird trainer Nicholas Bishop, from Taronga Zoo in Sydney, Australia. Our mission was to train eight S pix's macaws ( Cyanopsitta spixii) to accept nasal hormone therapy.

Additionally we were asked to train three Hyacinth macaws (Anodorhynchus hyacinthinus) for free flight with the ultimate goal to naturalize them on the preservation. This presentation will address the training process of the Spix's macaws. The training of the Hyacinths will be the subject of another paper.

I would like to thank Sheikh Saoud Bin Mohd. Bin Ali Al-Thani for granting me the opportunity to participate in this project. His generosity and devotion to the preservation of this (as well as many other) highly endangered species is to be admired and applauded. Currently he is in negotiations to purchase Concordia Farm in Curaca, Brazil, the location of the last known habitat of the Spix's. This property will become the site of a state of the art breeding facility for the preservation and possible release of this most highly endangered parrot species in the world.

We worked with four pairs ofSpix's set up in individual indoor/outdoor aviaries in the new Spix's breeding facility. Our task was to train these birds to present their beaks through a widened opening in their feeding bay, while we administered three drops of Fertagyl into their nares by pipette or syringe. This treatment would occur once a day for ten days. For this year's breeding season only two males would receive the actual treatment. If successful then the others would be treated the following year. The birds were a mixed group drawing from the flocks brought to Al Wabra from Switzerland and the Philippines, as well as birds bred in Qatar.

None of the macaws could be considered hand tamed, but would come to the feeding bay at mealtimes. Accustomed to their regular keeper, Julius, they were fairly comfortable with one person entering the internal hallway of their indoor aviary. Multiple people signified "veterinarian" to them, in which they would be caught up for whatever procedure was prescribed. While these birds were of the age to be sexually mature they had experienced little if any success in producing fertile eggs. Upon endoscope examination it had been found the reproductive organs were either immature or mature but not functioning. It is hoped that nasal hormone therapy will bring them to maturity and facilitate successful breeding.

Nie, Nicole and I arrived at the Spix's complex by 0530 daily. We held a morning training session, broke for breakfast (0900-0930) and returned for one more session with the Spix's before lunch (1200). Returning in the afternoon (1500), there was another session with the Spix's, then the Hyacinths. Approximately 15 minutes were spent with each Spix's pair and each individual Hyacinth in actual training. At the end of each day (around 1730) we regrouped in the bird kitchen, preparing food reintorcers and strategized for the following day. Training occurred every day for four weeks with three half-days off.

The aviary configuration made the task challenging. Each pair resides in a large aviary with indoor/outdoor access through a large window that could be closed when needed. Closing it was stressful (another "veterinarian" flag), so containing the Spix's pair inside the aviarywasnot an option. Our challenge was to make the training sufficiently reinforcing so the macaws would come and stay indoors during thesession. This was one of our greatest challenges with two of the four pair. One of our proudest moments was opening the door to the challenging pairs and finding both inside and waiting!

Time would not allow desensitizing the birds to our presence inside the aviary with them. Training had to occur through the feeding bay, a wire bay window that juts out into the internal hallway of the indoor aviary. The openings in the wire are approximately 3/4" x 2," some running vertically and some horizontally. Wider openings were created to allow the beak to pass through. The pair could not be physically separated so both birds had to be trained in the bay simultaneously. Since we planned to use a verbal bridge in training, a different word was chosen for each bird in the pair. Our bridges were "good" and "yes." Given the close proximity, hilarity and frustration ensued as we mistakenly used each other's bridge. When the desired behavior was bridged, it was reinforced with almond and walnut pieces. Larger or numerous bits of nuts were given as" jackpots" for exceptionally good performance. Ending on a positive note was of high priority and achieved frequently.

Lack of direct access created another challenge. Because all residents of Al Wabra were fed a high quality, nutritious and abundant diet, the Spix's were not food motivated. Weight management creates value in the food reinforcer and increases motivation. With permission and guidance from Ryan, Nie slowly reduced the quantity of their twice daily feedings, letting their motivation be one guide. We achieved the desired level of interest with their leaving a small amount of food in at least one meal a day.

The final training meals (shared by the pair) consisted of 6g of a quality soaked seed/ grain mix with two small pieces of fruit or corn in the morning and Sg of Harrison's High Potency Fine pellets in the afternoon. They received roughly 2 Yi g of almonds and walnuts per session.

The first step in the training process was to desensitize each pair to the presence of one new person in the aviary inner hall, eventually increasing to four. Most of the training occurred with three people present. Two males were more wary and took several days to allow more than one person in. For the pair to become acclimated to the pipette it was attached to the wire of the feeding bay. Initially Nie entered the inner hall offering food reintorcers. This built a positive history between the bird and the trainer.

Once a bird was comfortable taking the food from Nie, I joined him, each reinforcing a specific bird for coming to the bay and being with us. When we felt we had a high degree of comfort with our presence Nicole would join. Each bird would be called to opposite ends of the feeding bay for training. A pair's training proceeded based on their comfort level so that, for a while, each pair was at a different phase of training.