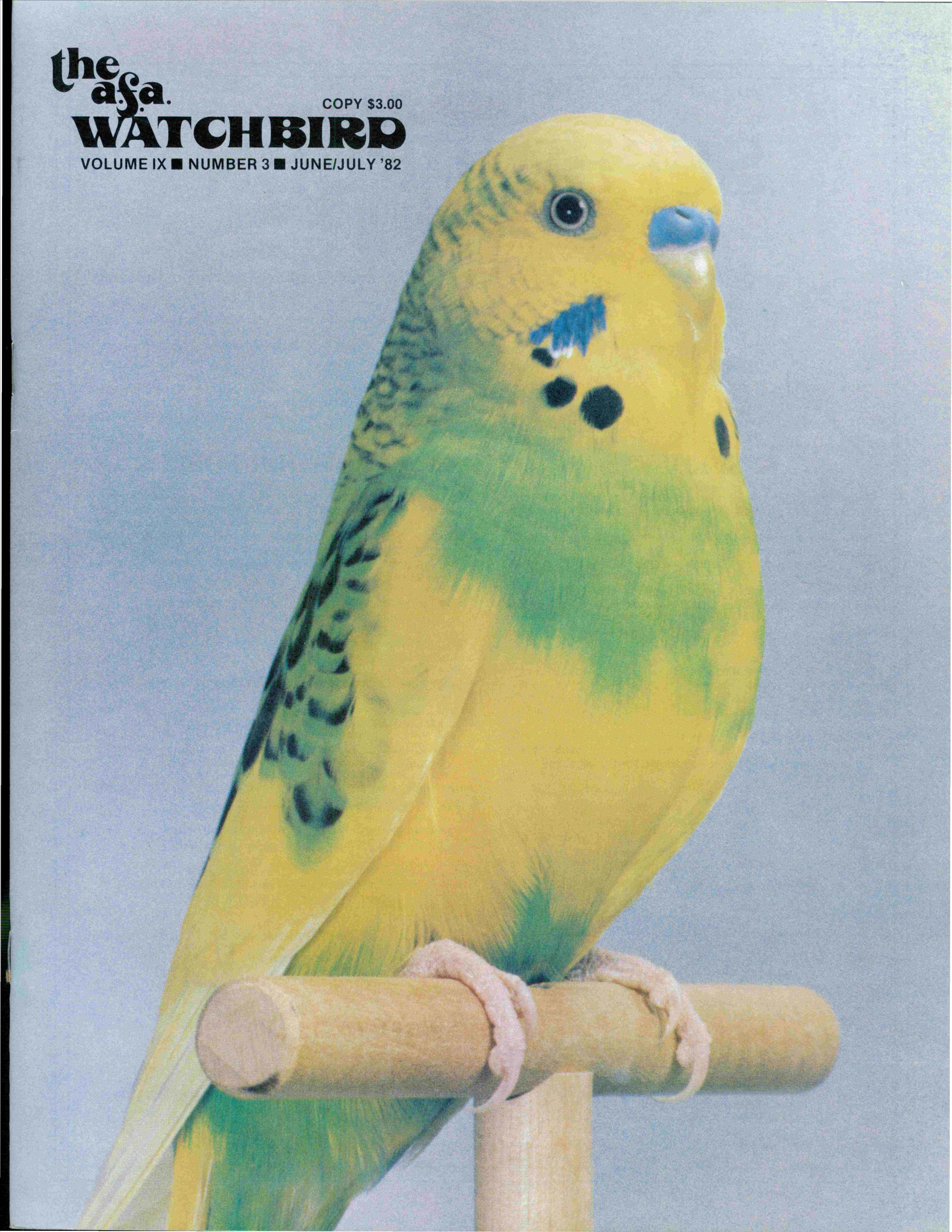 It is hardly believeable that a little wild bird from Australia, originally found only in a bright green color with black trimmings, is an ancestor of today's many colored and designed "budgie." Found to be a prolific and loveable cage bird, this small parakeet has been developed from one color, by mutations at the hands of knowledgeable fanciers, into so many color varieties it is now one of the most popular of our pet birds.

It is reported that even in the wild state color mutations were noted, such as blue but these color differences never seemed to be able to increase. Probably one reason was such an odd color would stand out in a flock of all green and thus become easy prey for predators. Also the original green coloring is so dominant that a blue bird's offspring would revert back to green with no chance of reproducing the blue color. Even today with all the different colors that can be bred together respectively, the green will crop up most unexpectedly.

Down thru the years the budgerigar became a show bird in its own right. Today's exhibition budgie is probably Ws larger than his wild cousin. The heads are much larger with wide skulls and thick, compact bodies. The throat spots have been enlarged to possibly four times the size of the original and of course the colors now surpass the rainbow in variety. The first requisite in today's show bird is one of size and conformation. Most fanciers I have talked to seem to be color-blind and look only at the bigness of the bird. To a color enthusiast, like myself, this seems so strange. Unfortunately, the show-quality size seems to be centered in just a few of the many colors of the budgie. Most exhibition enties are comprised of greens and blues in their various shades in normals and opalines. Also the Lutinos (yellow red eye) and the Albino (white red eye) have also been developed to a larger size. Add to these the varieties of pied birds and that is the approximate extent of most entries to the show bench. I'm beginning to believe the majority of today's birds are mongrels, colorwise, because of the years of crossing the colors (regardless if they match or not) to get the much desired conformation and bigness. Several years ago when I first started this color study I was mystified when some of my pairs would have, say, 5 babies in the nest with everyone a different color and different yet from the parents!

In the breeding of the budgerigars over the years many new color varieties have been created, hold the interest of a few fanciers for several seasons and then gradually return to the limbo from whence they sprung. Why? Mainly because they were not up to the exhibition standard; not because they were unique, a new color and beautiful in their own newness! Apparently all new mutations are on the small side and it would take several seasons of crossing on the larger birds to get them anywhere near to show competition. Most fanciers want instant show birds and so stay with the usual colors and patterns that produce the desired bigness. It is just too much time and work to bring up a new mutation to show requirements. And so we have, unfortunately, this shortage of the rarer varieties of parakeets that are infrequently shown and consequently the average fancier has a very hazy idea of just what beauty he is missing because he seldom has a chance to see it!

When I decided I wanted to breed these . rarer varieties I sent letters to many fanciers that had shown possibly one such bird at a local exhibition. Many did not bother to answer and those who did usually had so few in their possession they had no desire to sell. But persistence usually pays off and after almost a year of correspondence I finally had a start in a few of the colors of these seldom seen budgerigars. I think it would make interesting reading to learn about a few of such varieties, and most importantly, to see an illustration of each kind described. So let's get on with the story of these rare little beauties ...

The first one to catch my interest, just from reading about how difficult it was to produce a good one, was the variety called Clearwings. But first let me describe it to you. The Clearwing is a bird of color contrasts. In the green series the body and tail are green with the head, neck, back and wings a pure yellow. In the blue series the body is blue with the head, neck, back, wings and tail a pure white. The throat spots are very faint and are NOT required in a show specimen. In breeding these birds the idea is to get the body color as deep and rich as possible and the wings to be as free of markings as possible. Unfortunately, today's Clearwings are not as "clear" as we would like them to be. I remember when my first pairs of Clearwings arrived I thought sure some mistake had been made because the birds looked to me like very light greywings. They were the blue series and of medium size, good conformation but definitely NOT the required big bird. Since I am primarily interested in color and markings in my birds, the smaller size of these birds did not really bother me.

I am now breeding the Clearwings (also frequently referred to as either yellow wings or white wings) in both colors. I am also trying to reduce the faint markings on the head, back and wings still further until they are really "clear" of all markings. Very few of the variety are in evidence at the exhibitions in the U.S. but in England they have a special Clearwing Club and many fanciers breed the variety and are responsible for the large entries at almost every English exhibition. The Clearwing is popular in England and I am told they have developed some birds of very good...