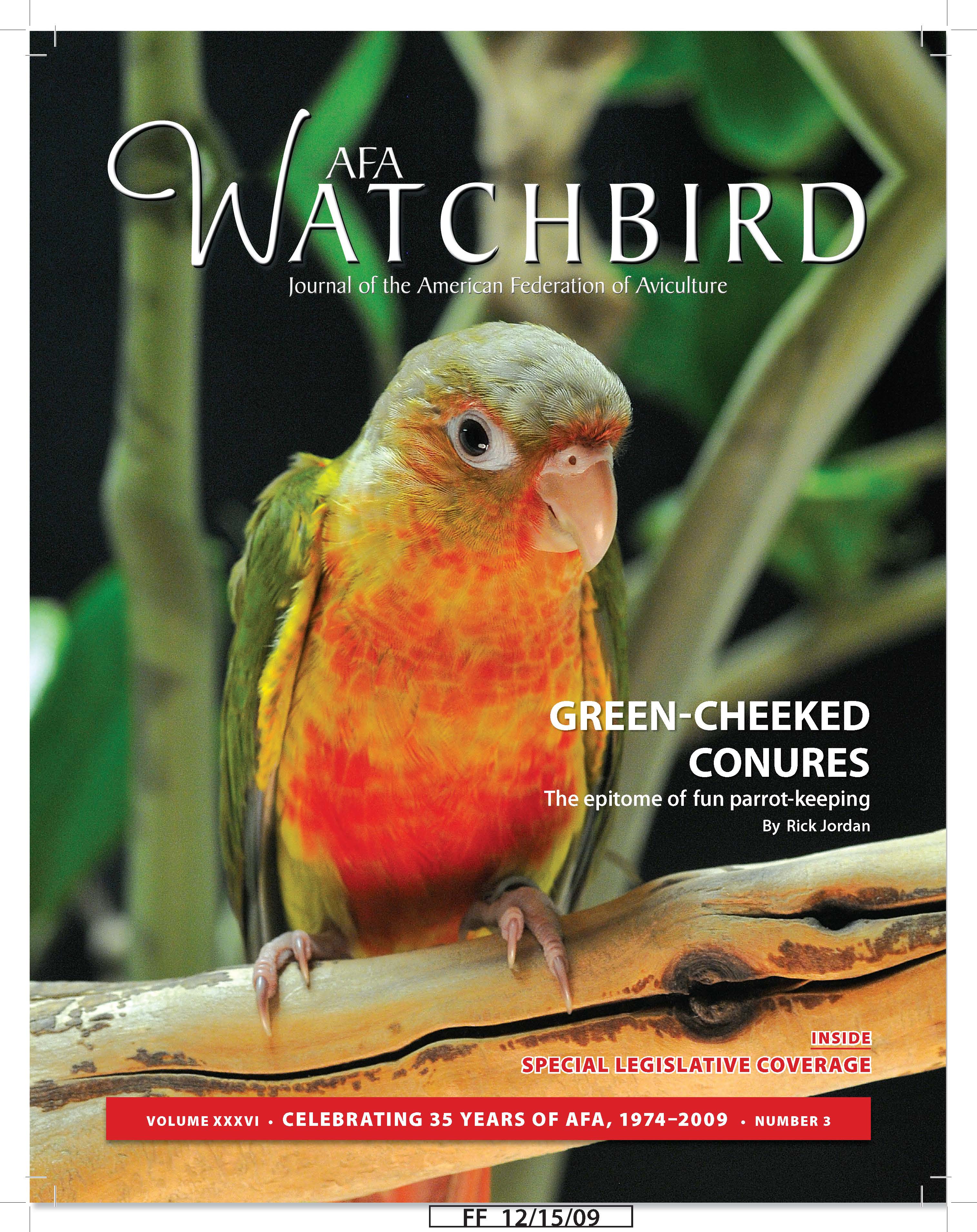 f there is one species of parrot that epitomizes "fun parrot-keeping," it is the Greencheeked Conure (Pyrrhura molinae ). Imported in rather large numbers in the 1980's, the Greencheeked Conure never really attainted its popularity until the first of its now many color mutations took hold in aviculture. In the United States, during the days of importing wild-caught birds, a few "strange" colored birds would arrive with each shipment of Green-cheeked Conures. This first color mutation had its own species assignment back then and was known as the Yellow-sided Conure (Pyrrhura hypoxantha). A stray Yellow-sided Conure or two would be mixed into shipments of normal colored Green-cheeked Conures, and aviculturists interested in mutations began to group them and breed them.

This experimentation took only a few years until captive breeders proved that the Yellow-sided Conure was, in fact, a wild occurring mutation color of the Green-cheeked Conure. Today we often continue to call them Yellow-sided Conures or yellowsided mutations, but the truth is that it is a sex-linked "opaline" mutation.

During the first few years of breeding the opaline mutation, virtually all of the resultant mutations colored birds were female. Of course looking back on that now, we realize it was because we were dealing with a sex-linked color mutation. This meant that normal looking male birds that carried the mutation gene could only produce mutation colored females when bred with another normal looking female bird. It was frustrating until someone finally got a split male (normal colored male carrying the opaline mutation gene) with a mutation colored female and produced mutation colored male offspring. From then on, it is history. The yellow-sided or opaline mutation of the Green-cheeked Conure became the first color mutation to be established in U.S. aviculture.

Actually, the U.S. may have been the only country at the time to establish this mutation evidenced by the huge demand for the bird in Europe and South Africa. Many opaline mutation Green-cheeked Conures were exported in the late 1980's and early 1990's which had led to the establishment of this color in other countries as well.

During the same time period that a few breeders were working with the opaline mutation, another mutation, then known as "fallow" was slowly becoming established in the U.S. True mutation fanatics (no offense meant) finally realized that what we were calling fallow, was actually a cinnamon mutation of the Greencheeked Conure. It proved to also be a sex-linked mutation.

So, as the fun began, people breeding opaline Green-cheeks and those breeding the cinnamon somehow decided to mix it up a bit. This lead to the very first combination mutation of the Green-cheeked Conure called the "pineapple" mutation. You can thank Steve Garvin of California for naming this beautiful bird after a fruit. He continues to name mutations with strange vernacular. The truth of this matter is that the pineapple mutation is actually a cinnamon opaline. Since both mutations are sex-linked, it took a phenomenon called "genetic crossover" for them to occur. Strangely we have now proven that this crossover happens more often than not when a male bird is split to two sex-linked color mutations. So the beautiful bird with the yellow and red chest became established in U.S. aviculture and known as the pineapple Green-cheeked Conure.