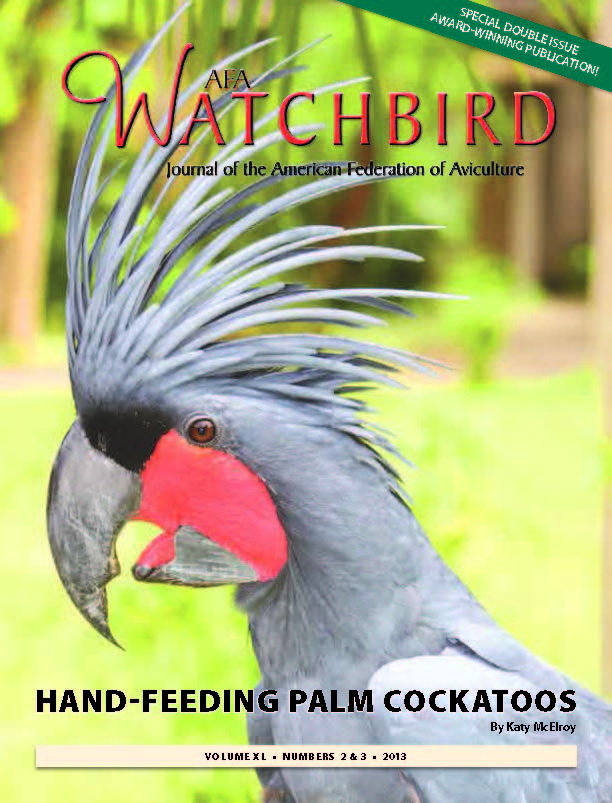 Not surprisingly, and despite innumerable benefits, aviculturists continue to find it daunting to explore the principles that explain heredity. Even the word, "genetics" may cause some to inwardly cringe and shudder. Yet, genetic principles are crucial to our understanding, because knowledge of genetics can empower aviculturists with the ability to produce healthier strains of viable breeding stock and future generations of robust species. When correctly bred, breeding lines pass on such set qualities as increased egg production, higher fertility, strong immune systems - and when properly applied - the ability to produce primary and rare color mutations to order. An understanding of simple Mendelian rules and other modes of inheritance need not be complicated, and many models, once understood, are surprisingly simplistic.

Although our first inclination is to apply genetic principles to outward color mutations and patterns in birds, the laws of genetics equally pertain to all the traits inherited in a bird's genotype. When applied correctly, the laws of genetics allow us to produce large, saleable baby birds raised by fertile parental generations who successfully incubate, feed, and wean their own babies, and also allows us to show the most exquisite bird to top perfected show standards. In other words, the principles of heredity affect every inherited trait - both visible and invisible - in a bird's genotype or full genetic makeup.

Many of us learn avian genetics from our own hands-on work "in the field" (i.e., the aviary), and from information gathered and contained in our own studbooks, rather than through formal study. Our budding knowledge and gradual absorption of facts over time contribute to the subtle and seemingly effortless process of learning through osmosis. Admirable. Except that even the most successful aviculturist may not possess the text book knowledge to separate scientific fact from popular misinformation. We pay attention to what is written on the internet, or passed on as good advice by the well meaning, to sometimes discover that what is stated from "experts" may not be as factual as hoped for. The following attempts to address some of the top ten myths that are still perpetuated today in avian genetics so that we can side-step these errors.

There is still much confusion around the differences between breeding color mutations within a species, and producing hybrid offspring between two different species.

For clarity, the term "mutation" refers to changes in the outward color or pattern of a bird. So, what are color mutations? Mutations may be caused by a variety of factors, but generally arise in aviculture as a sudden onset of a variation known as a spontaneous mutation which produces a new, anomalous color or pattern that differs from the nominant (wild form) of the species. Some spontaneous, partial mutations - if not fully developed - may require a planned, selective breeding program requiring several generations to achieve the full maturation of the final mutation.

Viable mutations are able to reproduce because the genes - when inherited in the progeny - are either passed on as visuals (homozygous), or carried as splits (heterozygous), depending upon the full genotype of the parental generation.

Producing hybrids, on the other hand, requires mating a bird of one species to a bird of a different species. For example, breeding Red-lored Amazon parrots to Green-cheeked Amazon parrots would result in offspring that are neither 100% genetically Red-loreds (Amazona autumnalis), or 100% Green-cheeked Amazons ( Amazona viridigenalis). Instead, the two different species would produce hybrid offspring that would not be recognized as either species - autumnalis or viridigenalis.

Although color mutations are encouraged and sought out by many aviculturists, most avicultural organizations frown upon the production of hybrids for an important reason. Producing hybrids and breeding their successive young will dilute the limited gene pool of stock available for the species involved. To continue to do so may affect the future availability of species. Whereas, producing color mutations is simply changing the color and/or pattern of the species outwardly and in no way affects their future establishment in captivity when bred responsibly.