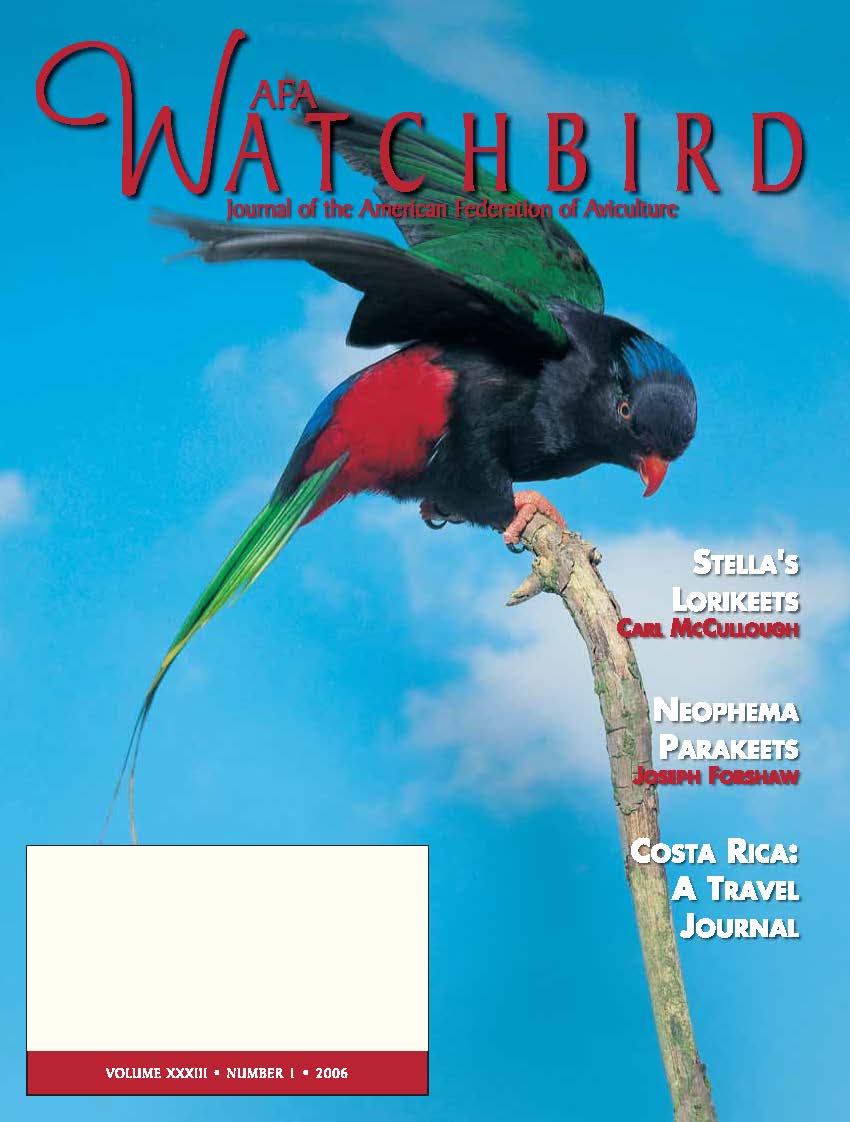 Because of their popularity as aviary birds, the Neophema parakeets probably are the most familiar of smaller Australian parrots. Their quiet, unobtrusive habits make them ideal aviary birds and contrast markedly with the bold, noisy behaviour of their larger relatives - the Platycercus rosellas. Together with the rosellas, they are members of the platycercine or 'broad-tailed' group of parrots, which take their name from the broad, long, graduated tail that is present in most species. Another prominent feature is the presence in females and immatures of a pale 'underwing-stripe' comprising a series of white or yellow-white spots on undersides of the flight feathers, and this can be a useful guide in sex determination.

Approximately 20cm in length, Neophema species are ground-frequenting, seed-eating parrots widely distributed through central and southern Australia, including Tasmania and offshore islands. Plumage coloration is predominantly green and yellow, with yellow being particularly conspicuous on the undersides and outer webs of the tail-feathers. Within the genus there are two species groupings, which are differentiated by patterns of plumage coloration and sexual dimorphism. These two groupings are treated as subgenera, and sometimes have been separated generically, though the differences certainly do not warrant recognition at that level.

A prominent blue frontal band, an absence of red in the plumage, and very slight sexual dimorphism are distinguishing features of the four species belonging to the subgenus Neonanodes, while two species in the subgenus Neophema show strong sexual dimorphism, with red in the plumage of adult males, and have extensive blue facial markings. The distinctively colored Bourke's Parakeet Neopsephotus bourkii no longer is included with the neophemas.

Identified by extensive dark blue wing markings, a pale green throat to upper breast, and a dark blue frontal band not extending above or behind the eyes, the Blue-winged Parakeet Neophema chrysostoma is widespread throughout much of southeastern Australia, though breeding is restricted to southern regions, and the Tasmanian population is migratory, with most birds crossing the 200km wide Bass Strait to overwinter on the mainland. It is the least specialized of the neophemas, occurring in a wide variety of habitats, though favouring forest clearings, savanna woodland, sparsely timbered grasslands, and cultivation, including orchards and farmlands.

It is quite common, especially in Tasmania, and generally is seen in pairs or small flocks, though large flocks may be encountered in winter, and at times it associates with other neophemas in mixed foraging flocks. Near Robe, in southeastern South Australia, I have seen it with Elegant Parrots N. elegans and Orange-bellied Parrots N. chrysogaster in a single flock feeding on seeds of sea-rocket Cakile maritima. In the morning and late afternoon, pairs or flocks spend much time on the ground searching for seeds, and while feeding among grasses or in low bushes their plumage blends well with the vegetation so that they may be overlooked until they take flight. They are tame, and normally will allow a close approach, but if disturbed the entire flock will rise simultaneously and fly to a nearby tree or will rise high into the air. During the middle of the day, they shelter quietly in trees or shrubs, often sitting on leafless uppermost branches of a tall eucalypt, all turned so that their heads face into the prevailing wind. Nesting takes place late in the year, with egg-laying normally commencing in late October, and chicks may fledge as late as mid February. Nests are in hollows high up in tall eucalypts or near to the ground in decaying stumps.

The Elegant Parakeet Neophema elegans can be distinguished from the Blue-winged Parakeet by the less extensive blue wing markings, by the paler blue upper frontal band extending above and behind the eye, and by a generally brighter, more yellowish plumage. These two similar species frequently are confused, and I have found misidentified specimens in museum collections. Whenever I have seen Elegant Parrots in the wild I always have noted their brighter, more yellowish appearance, as opposed to the generally duller appearance of Blue-winged Parrots, and this difference is most obvious when both species are together in a mixed flock. The differences are clearly described and illustrated in my recently published Parrots of the World: An Identification Guide (Princeton University Press, 2006).