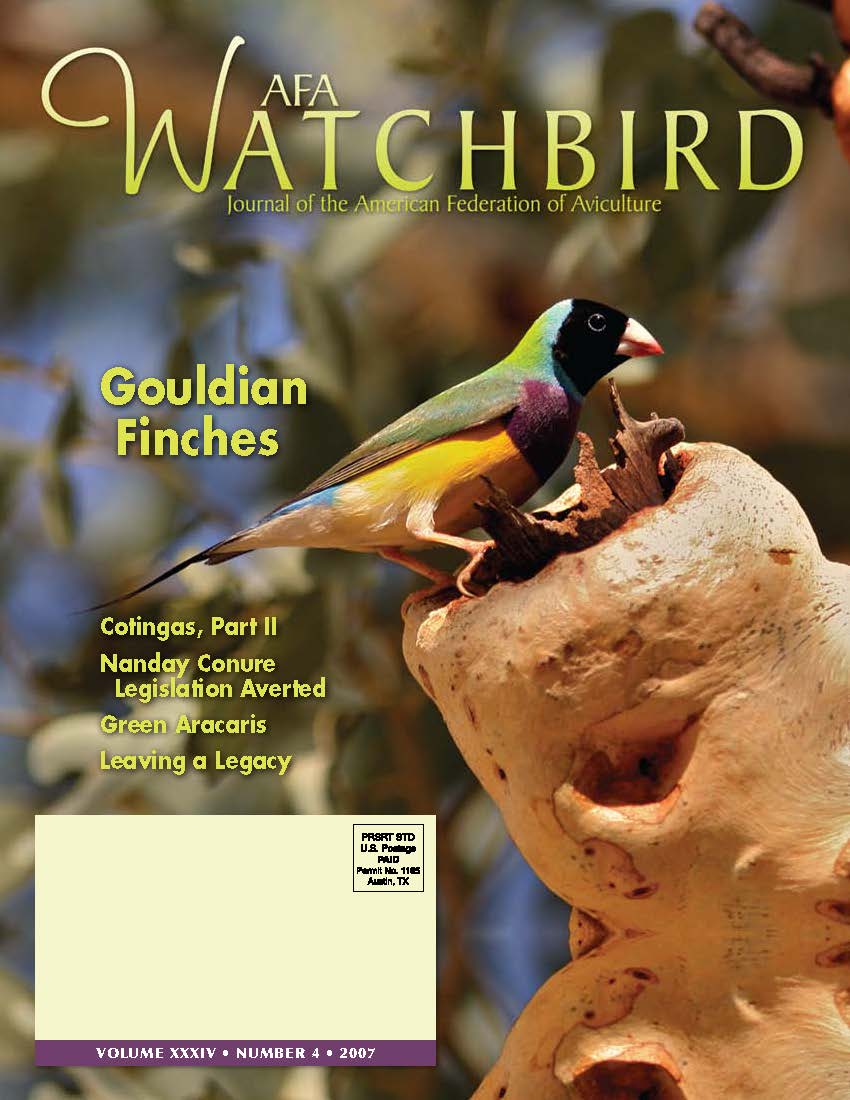 We announce a great breeding success with our Plum~crowned Parrots (Pionus turnultuosus). Two chicks of this rarely kept parrot species are being raised at the moment in the Baby Station of Loro Parque. This parrot species, with origin of the nominate race in Bolivia to central Peru, doesn't count as an endangered bird species. However, forest clearance in the Andes can be the main cause of a decline and this is why it is important to establish a corresponding safety net and genetic reserve in captivity.

This year, our Slender-billed Conures (Enicognathus /eptorhynchus) haven't showed the same success as in the last years. Only one female of the group intended for breeding laid eggs, and only one of the three eggs was a success. This chick is now growing fine with its parents.

After a longer breeding pause, we are currently raising two Green Conures (Aratinga holoch/ora). The parents are undertaking their breeding and rearing activities well, so that help has not been necessary.

Naturally our three Lear's Macaws (Anodorhynchus /eari) are giving us very much pleasure. All three of them are growing well, and in the middle of August the first young fledged, which was being raised by its foster parents, a pair of Green-winced Macaws (Ara ch/oroptera). Now the youngster is flying around in its aviary in an oriented way and shows the typical natural fear which parentreared chicks exhibit. Again and again the "blue"young bird is seeking protection with its parents, which are taking care of it perfectly, although it looks totally different from them, not least that its size is notably smaller than its foster parents. Also the other chicks are developing well, where one is being raised by a further pair of Green-winced Macaws and the other by its own parents. Now, they both have the first blue feathers. However, they still need some more weeks until they will take their first flight out into the aviaries.

During the first week of September, a team from the German television channel VOX came again to Loro Parque to take footage for the series "Menschen, Tiere, Doktoren" (People, Animals, Doctors). In this daily broadcast series, Loro Parque is a regular subject. High audience rating induced the TV channel to continue this series until at least mid~2008. Until now there have been over 60 broadcastings recorded in Loro Parque for this more than one year-old German series. The biologists and veterinarians of Loro Parque are pleased to introduce the audience to the world behind the scenes, and to report on their daily work with the animals. These programmes are naturally focusing on the parrots, the daily work with them in the Baby~Station and the clinic, as well as the monitoring and the peek into the breeding centre of Loro Parque Fundaci6n, normally not open to the public. In this way the spectator is able to see a Spixs or a Lear's Macaw directly, but also useful tricks for their own parrot collection and breeding.

Now the second youngster of the three young Lear's Macaws (Anadorhynchus leari) has also Aedged. All three of them are prospering well. While two of them have been raised by the foster parents, a pair of Green-winced Macaw (Ara ch/oroptera), the third of the youngsters is still being cared for by its own parents in the nesting cavity. The first youngster is already eating by itself, however still begging from his foster parents for an extra portion of food. The second youngster, which fledged some days ago, is flying around but still dependent on the care and the provisioning of its foster parents. Despite of the different plumage colour of the young Lear's Macaws, the Green-winced Macaws accept their youngsters without any hesitation. Until now, the third youngster didn't show at the entrance to the box. However, we are expecting him to fledge during the next few days, leaving the nesting cavity for the first time.

After a breeding pause of several years, this year the breeding of a Lesser Vasa Parrot (Coracopsis nigra) succeeded. These parrots, which are bred very rarely in captivity, have raised their single youngster by themselves. Now he has fledged and is very difficult to distinguish from the parents. Especially striking was the potent noise during the rearing period. Over and over again a kind of strong "singing" by the adults could be heard; the tones not being the usual parrot vocalization, but rather melodic in their sequence.

Apart from the above, the breeding period has waned and there are only some latecomers breeding at present. Thus there are currently growing, among others, three young Chestnutfronted Macaws (Ara severa), some Scarlet Macaws (Ara macao) and Blue and Yellow Macaws (Ara ararauna) as well as numerous Blue~throated Macaws (Ara glaucogularis).