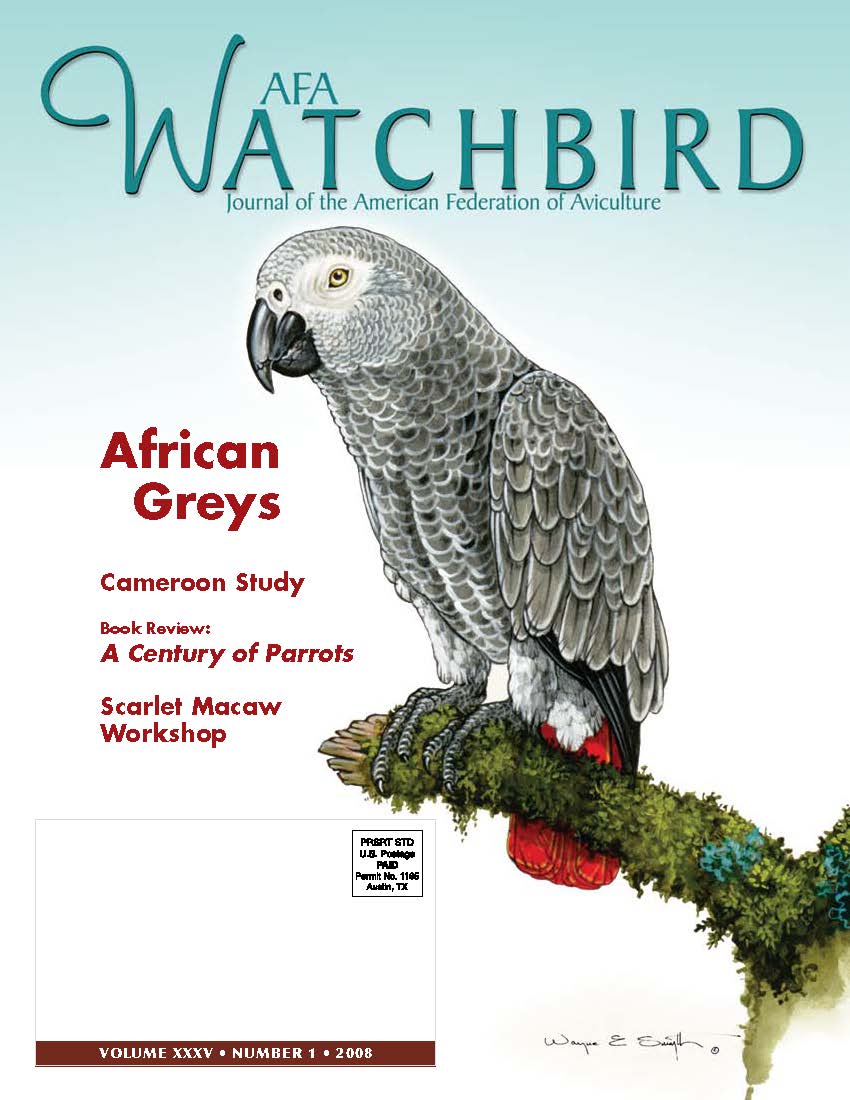 Precisely on the 17th of December, the 35,h anniversary of Loro Parque, a new huge bird aviary was inaugurated. Now, awaiting the visitors at the point of entry to the jungle of Loro Parque, is an aviary of 32 meters length, 12~ 15 meters width and 6 meters height. Three naturalistically designed artificial jungle trees are the fundamental feature of a diverse structure in the aviary's interior. Additional real roots, tree trunks, a cliff wall and numerous arm-wide ropes offer a great diversity of perching and climbing possibilities to the inhabitants. A big Aock of Blue~throated Macaws (Ara glaucogularis) has been chosen as first inhabitant of this ample aviary. For several years now, the Loro Parque Fundaci6n has successfully bred this species, critically endangered in the wild. Thus, one priority of the Loro Parque Fundaci6n is also the conservation project for the wild Blue~throated Macaws and, thanks to these efforts and LPF funding of over 400,000 €, the population has now recovered from a size of only 50 to about 400 animals. Considering the positive evolution of the population, this is money welHnvested. In order to increase the attention of the visitors to Loro Parque about this important conservation work, a large information sign in three languages has been installed. To observe such a big flock of macaws of the same species in action in such a huge aviary is a real eye-catcher for every parrot fan. There is always activity and almost no moment when birds are not flying around, climbing or loudly declaring their zest for life.

And in time for Christmas, somebody had prepared a big and special surprise. The first little Palm Cockatoo (Prooesciger aterrimus) of this season hatched from the incubator. Hatched weighing 16.8 grams, the bird has grown strongly under hand-rearinq and now (mid-January) weighs more than 100 g. After only 10 days, the little Palm Cockatoo had opened its eyes, attentively observing its surroundings. Another fertile Palm Cockatoo's egg is at the moment developing in the incubator.

Our experienced breeding pair of Riedel's Eclectus Parrot (Ec/ectus roratus riedeli) has, like every year, begun to breed during our winter time. Of the first clutch, which included two eggs, one resulted fertile and is developing well.

From the parrot breeder Frank Samuel of Essen, we had the opportunity to receive two Greater Yellow-headed Amazons (Amazona oratrix magna). This subspecies wasn't represented in the parrot collection until now, and thus increases the Amazon collection to a total of 45 species and subspecies.

From the 4th to the 11th of April 2008 the next German Parrot Workshop will take place in Loro Parque, in collaboration with the magazine PAPAGEIEN. The one week long event offers numerous presentations and seminars given by the biologists and veterinarians of Loro Parque Fundaci6n, as well as by guest speakers concerning parrot management, breeding, hand-rearinq and diseases. Furthermore the participants will have the unique opportunity to have a look behind the scenes of Loro Parque and to ask questions to which one always wanted to know the answer. More information at: arndtverlag@aol.corn.